You can now renew your annual licence using our new online portal!

You can now renew your annual licence using our new online portal!

You've been a member of the Scottish Goju Ryu Karate-Do Association for 40 years now that’s remarkable. Where did you Start training?

I started training in February 1982 and got my first licence on the 19th of April 1982. We trained at Buckhaven community centre on Wednesdays. I also started training on Mondays at a church in Leven. Jim Flannigan was the instructor at these dojos. Andy Anderson, Jackie Young, Les Yeates and Derek Cawkwell were the black belts at the time.

I attended a couple of international Gasshukus in Glenrothes in the summer of 83 and 84. These were my first opportunities to train with Sensei Morio Higgaonna and all the top students and instructors at the time. 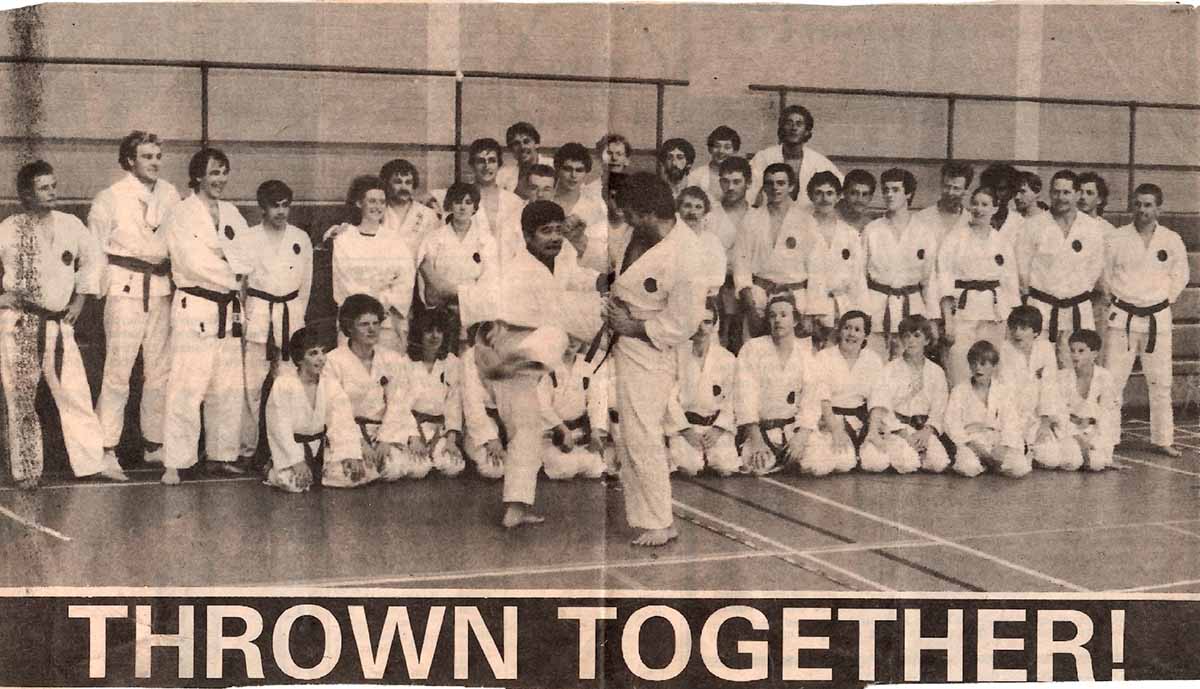 I attended my first international Gasshuku abroad in Quimper, France. We drove down from Scotland. There was Davd Dryburgh, Les Yeates, Marshall Kingett and Sean Steenson in the car too. This was my first opportunity to meet John Lamberts` brother David who had emigrated to Australia.

I received my first dan on the 14th of December 1986 at Shihan George Andrew`s dojo in London under James Rouseau. Jim Flannigan, Jim Forbes and David Dryburgh also sat grades at the same time.

The following year we went to Spain for the Gasshuku. I struggled at training on the last day after ending up going for a drink with David and John Lambert the night before.

Derek Cawkwell, Sean Steenson and I went to Birmingham in July 1988 for the Gasshuku. We eventually found the venue after ending up at the wrong university. It was an experience getting a lift there in Dereks` Ford Capri 2.8 injection.

I sat my 2nd Dan in Balwearie High school in June 1989 in front of Shihan George Andrews. I then went to the Bournemouth Gasshuku in July with Jim Flannigan.

There was another Scottish Gasshuku under Sensei Higaonna in march 1990 in Glenrothes and Buckhaven.

We started training in Mountfleurie Neighbourhood Centre on Monday for a few years before ending up at Balbirnie Gym. I also trained at Pitcoudie in Glenrothes as well.

I went to Okinawa in September 1991 with John Lambert, Jim Flannigan and David Dryburgh. Jim made a video of this experience and called it Okinawa the movie. 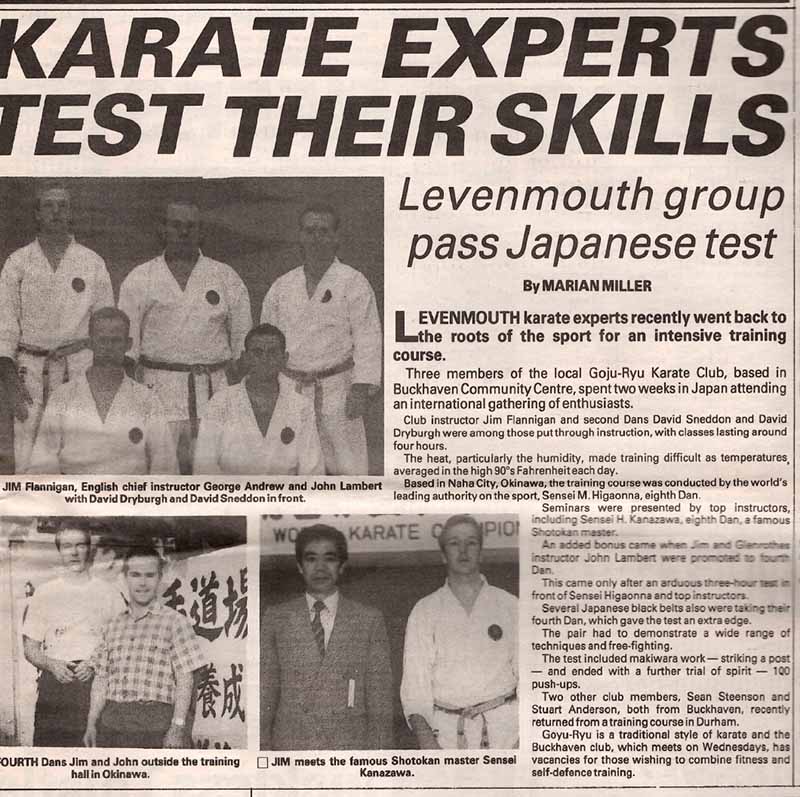 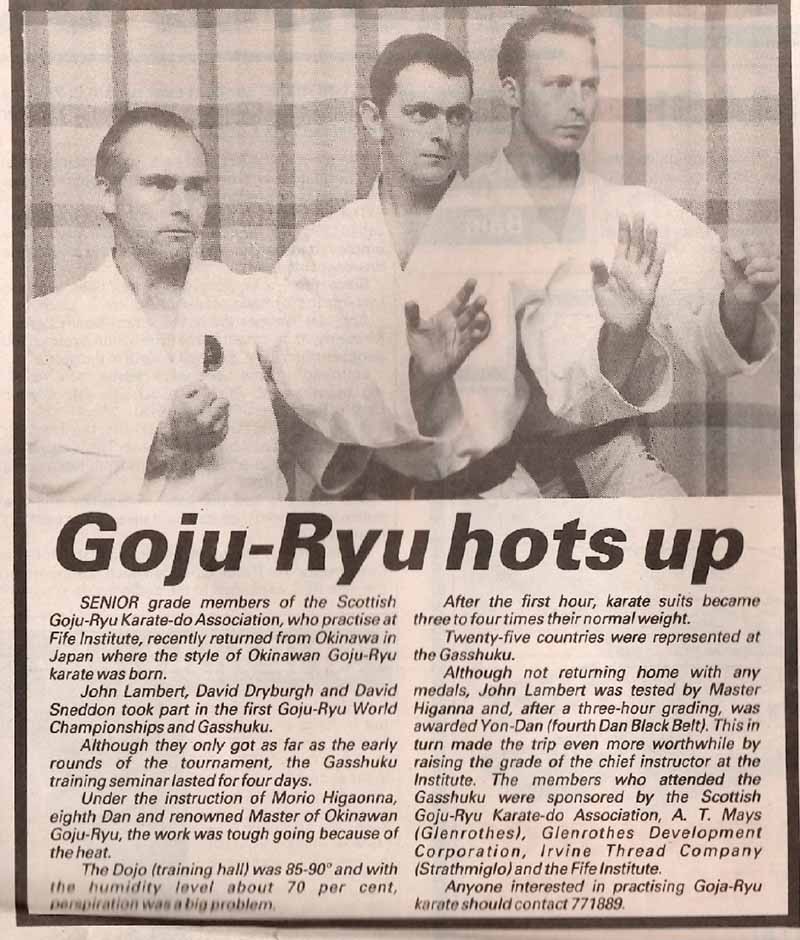 I sat my 3rd Dan in July 1994 at Balwearie High school under Shihan George Andrews. I seem to have not sat another grade since due to one reason or another. I started training with Frank Sargent Sensei around the end of the nineties after Jim closed the club. Then after that Frank Sargent Sensei retired and I’ve been training with Callum Dick Sensei assisting with coaching in class at gasshukus and acting as a member of the SGKA grading panel.

Sensei Higaonna came to Scotland again in 2003 at St Andrews High school, Kirkcaldy and the memorial Gasshuku for Sensei John around 2011.

There was also the 2014 Gasshuku that took place 30 years after the first one, and more recently with Masuyama sensei and Bakkies Sensei at our National Gasshukus in Edinburgh and Glenrothes.

The last couple of years have been virtual Gasshukus with Sensei Nakamura, Sensei Ernie Molyneux and various top instructors, and also a few from South Africa with Sensei Bakkies.


What have you learned most from Karate?

I’ve probably learned that you can achieve a lot if you learn a little each time over a long period of time.


What do you think Karate training has given you and /or offers to people of today?

Karate has made me stronger physically and mentally as I was quite shy when I was younger. It also offers people the opportunity to beat their own perceived limits and meet and train with like minded people.


What are your goals going forward?

Goals going forward are just to try and get better than I was. I suppose I should sit another grade at some point but it’s not a driving factor.

Thanks David, On behalf of the SGKA I’d like to award you this certificate in recognition of your 40 years of dedication and service to the SGKA. 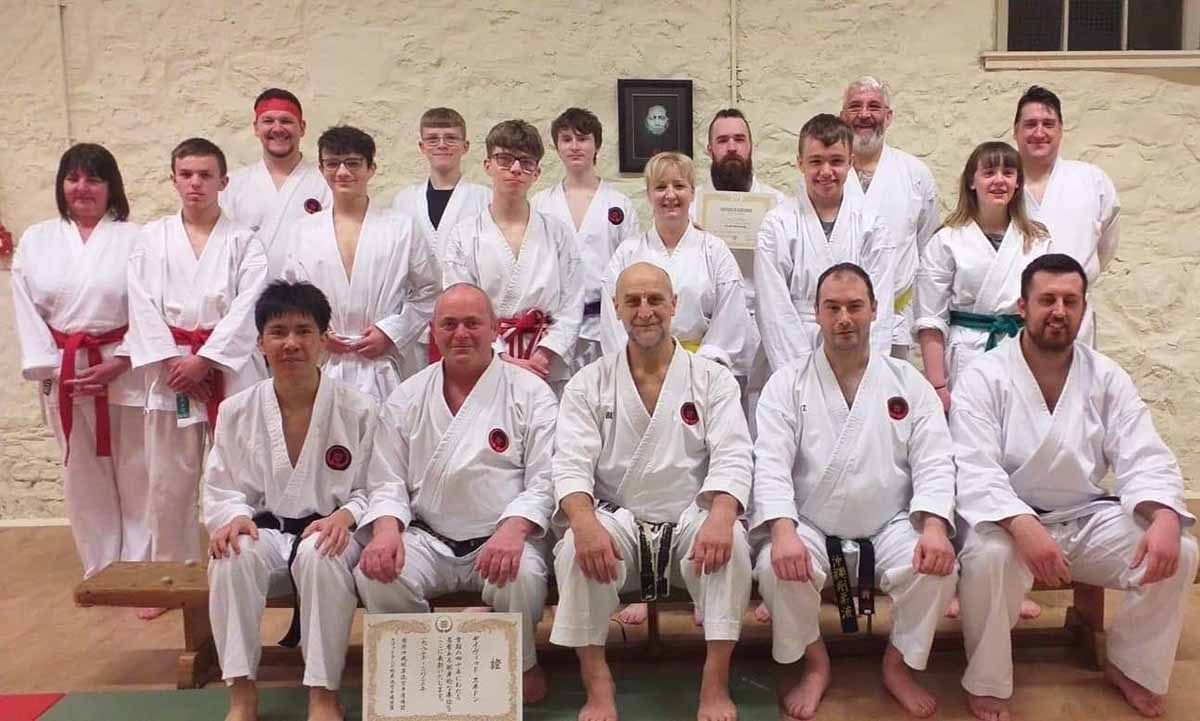